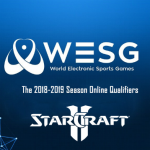 
Important announcement: the November 4th DSCL Nationals qualifier in the Esports Game Arena has been cancelled! This is because it would have overlapped with the first of two online qualifiers for the World Electronic Sports Games (WESG) for Benelux players. Good news though: that WESG qualifier now also counts for the DSCL Nationals. See DSCL.nl/nationals for the updated list of qualification tournaments.

The WESG is a giant tournament and one player from the Benelux can earn a spot at the finals in China next year. To determine which player there’s going to be two online qualifiers on November 4th at 18h and November 14th at 19h, for which you can sign up via this form. The winners of those qualifiers play against each other to determine which of them gets the ticket to the WESG Global Finals.

Just to be clear: only the first of the two WESG qualifiers awards points for the DSCL Nationals, but of course you should still sign up for both of them. Let’s make sure the Benelux gets a worthy representative sent to China!